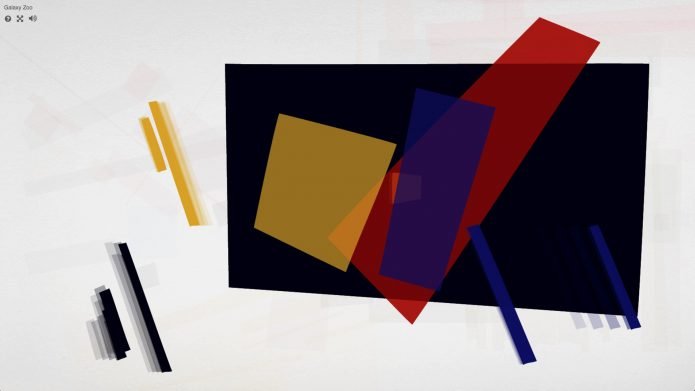 Julie Freeman is interested in using data – particularly ‘life data’ – as an art material. She develops software that lets her transform the movement of biological creatures, such as fish or human beings, and environments, before converting this information into stunning visual pieces. NEoN digital communications officer Ana Hine caught up with her to discuss the new work she’ll be displaying at the Sleeperz Hotel on South Union Street during the festival.

Ana: Your images from We Need Us are reminiscent of Vilmos Huszár, is he an influence? What artists influence you?

Julie: We Need Us comes from two places – one is the idea of humans as social machines, and the need to remember that we humans are behind our technologies. The work was made in 2014 when AI and ML hype was on the rise (again), complete with the myths of machines taking over – an oft repeated science fiction motif that the media seem to adore.

Zooniverse is a tool that allows scientists to invite thousands of people worldwide to look at their data (whether images, sounds or other) and classify it using their own human senses. These data sets currently can’t be analysed by an algorithm; classifying them requires human intervention.

I was struck by the altruism of the participants of Zooniverse – millions of users donate time to classifying data on the site. It’s a remarkable system which raises many questions about how many people want to engage in scientific progress and the future of our planet.

The other aspect of the work is a critique of the idea of data visualisation providing some kind of ‘truth’. The work is influenced by the Russian Suprematist work of artists such as Malevich and Popova. The idea of razing realism and the figurative to the ground and working toward a new perspective resonated with me in regard to the use of data to represent the world. I’m curious about the hazardous concept that data can give us a higher, or God-like, view – like Heylighten’s idea of a World View, or the Overview Effect coined from first images of Earth from space. When we get a new slant on the world we tend to over-value it because it provides new knowledge and empowers those that have it. Data visualisation to represent data ‘truth’ is often seeped in bias (known or unknown) and political will, even if non-partisan. There is a privilege in the techniques; data has become a mechanism of power in some cultures. We Need Us uses data visualisation techniques in an artistic context. The sound and animation are not designed to give anyone information about the data, they are a translation of the data which shows the approximate dynamics of a system, the life of the data as it accelerates and decelerates, as it repeats and creates patterns, or as it fails.

What kind of data does the work use? Are you tracking people?

No. The metadata (which is data about data) used in We Need Us is dynamic activity data – not really what I would call tracking data. We are mainly looking at the frequency that individual projects are interacted with, and using that to create different rhythms over time with sound playback and through the activity of individual or sets of shapes.

The human activity data used in the work is a stream of open metadata that is available through an interface to use for other purposes. Usually this data is analysed for metrics but I’ve used it as a source of dynamism in the artwork. I’m not interested in tracking humans for behavioural analysis or for location detection, or for anything really, but I have worked with animal tracking in other projects.

You talk about data being an art material, can you expand on that a little?

I do talk about it a lot. As I mentioned, data has developed a curious status of being regarding as truth or evidence, and yet the ‘data flow’ (the process of collecting, storing, analysing, translating and representing data) is peppered with subjective decisions (my PhD thesis contains a lot of detail about this).

By considering data as an art material, it becomes malleable, playful, trivial, ambiguous and more. It’s used by artists is so many different ways that any definition of data art meaning an aesthetically pleasing piece of data visualisation or design is too narrow, and inaccurate. I define data art as “translations of digital data to create cognitive, physical and/or sublime artworks”. This definition of data art can encompass a wide variety of work produced with and about data which takes us from the screen to audio, to dance and performance and into biological and conceptual art practices. In this sense it is very much a material which artists work with in the digital and physical domains.

Are you ever surprised by the final outcome of the work?

Yes and no. My work exists within a framework and a set of parameters that I’ve defined so I know mostly how the work will look, even if I don’t have a sense of the speed that things will change at. The most unexpected moments arise from the sound; for me it’s much harder to imagine a multi-layered rhythm of tiny sampled sounds than it is to imagine the visual elements working together. The audio is the aspect I play with most and in some of my work a secret layer is implemented that lets me play around in real-time in the finished version. We didn’t do this for We Need Us,  though I wish we had!

The surprise comes from the live data as it is hard to predict the pace and classification of data that will be received. Zooniverse projects all have a different pattern – some are very active at the end of the working day in the ‘States, other projects have bursts of activity due to classroom activities or specific promotional events. The way that the work shows this ebb and flow of Internet use is part of the appeal – looking beyond the detail, data can be used to evoke a sense of community action or the dynamic properties of a group.

As We Need Us is the piece you’re showing at NEoN, how are you modifying it and how are you planning to incorporate it into the Sleeperz Hotel?

This evolution of We Need Us has been commissioned by NEoN, which is pretty unusual. The original work contained ten compositions and used an old API (Application Programming Interface) to pull data from the Zooniverse platform. The NEoN curators have not only enabled me to only create five new compositions, but it is a commission that is ensuring that the work is preserved for at least another few years, until the technology changes again. The longevity of dynamic online works is precarious as they are vulnerable in so many ways – data source availability, browser technology, security updates, server upgrades, URL expiry, hosting funding, and more – so it is essential that maintenance and after care is carefully considered. The longitudinal nature of a project like We Need Us poses problems for archival and maintenance beyond the original commission period and it is an ongoing responsibility for artists to maintain these works. It is important for this to be recognised, and NEoN has done that.

We Need Us will be on display in the lobby of the Sleeperz Hotel, South Union Street, Dundee and will be accessible daily until 12.00am from November 6 until November 11.