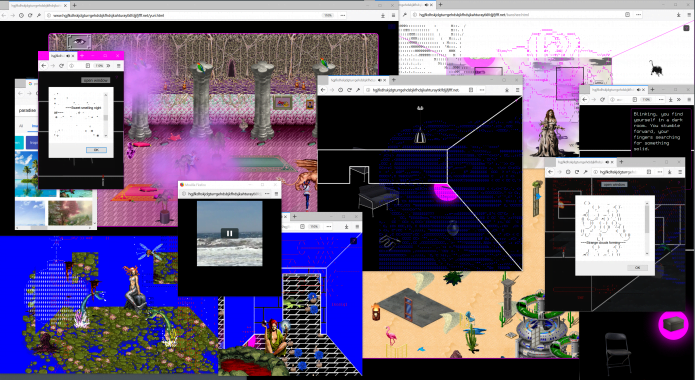 NEoN blogger Ana Hine caught up with Cassie McQuater to discuss her online interactive art piece ‘Black Room’ and how she feels about this year’s festival.

Ana: You’ll be taking part in the Weave group show in the Wellgate. How did you get involved in Weave?

Cassie: Clare Brennan reached out to me to introduce me to NEoN festival, and asked if I wanted to be a part of it. The festival looks great and I love many of its past/present participants so I am excited to be included!

Your piece ‘Black Room’ places the player in the mind of an insomniac. Do you suffer from sleep problems yourself?

I do, and I have since I was young. The narrative poem in Black Room is something that was actually recommended to me when I was a child to help with falling asleep. The idea of that device is this: imagine a black room; in the black room is a black chair; next to the black chair is a black vase; across from the black vase is a black pen; and so on and so on, with the intent that the imagined darkness would lull one into a dream state. It always confused me and made me more anxious than relaxed – which is also what the game is about.

The style is very reminiscent of the early Castlevania games. Were they an influence?

My grandma was an insomniac and would stay up all night playing NES and SNES games. She particularly loved RPGs like Zelda and the Mana Series, Zombies Ate My Neighbors, and the early Final Fantasy games. I would sleep over at her house and relish staying up all night watching her play these games. I’d say these are more of an influence than the Castlevania games, but when I was making the work for Black Room I repurposed a lot of Castlevania elements, specifically, because they are so beautiful and rich. The intro scene pictured, for example, has the main character from the PC horror game, Clock Tower, running in front of a burning town background from Castlevania. Castlevania has a complex, die-hard fan base who will recognize all of the elements from that series in my game, and I really appreciate that.

What do you want the game to achieve, both in itself and for the player?

I wanted the game to be a meditative journey, a new experience inside of an internet browser. I wanted people to be able to click all over a page on the internet and not have anything bad happen. And I wanted people to see the square shape of their browsers a little differently — in Black Room, the browser becomes both a viewer and a controller. I’ve been trying to break the browser out of it’s square for a long time, this is a small step towards that. We take the shape of the internet for granted a lot, this is what I was thinking about when developing the central mechanics of this game.

You describe both ‘Black Room’ and ‘Woman in a Videogame’ as “feminist”. Can you unpack that a little for us?

Black Room is a game that uses mostly women sprites from the cartridges of vintage games and reinvents their narratives to be a less inherently sexist. Video games have long had a problem with representation. Women in fighting games, especially the late 80s/early 90s arcade games that most of the content from Black Room is sourced from, are extremely sexualized and brutalized, both in their character design and in the way their attack animation sequences are structured. We have the “invention” of breast physics in the Mai Shiranui character in 1992 as one example. Breasts are unrealistically bouncy, women character animation sequences are sexualized for a predominately cis male fantasy, and are also disproportionately made by male programmers. Storylines for women characters generally follow the traditional narratives of straight male desire. Both Black Room and Woman in a Videogame seek to upend that and turn that gaze back on itself.

What are you excited about for this year’s NEoN Digital Arts Festival?

I can’t wait to see all of it! This is my first year participating so I’m just excited to see and feel what it’s about!

The Weave exhibition ‘Lifespans: Forever And Ever’ takes place at Units 9-11, Level 3, of the Wellgate Shopping Centre from Tuesday 6th of November until Sunday 18th of November.