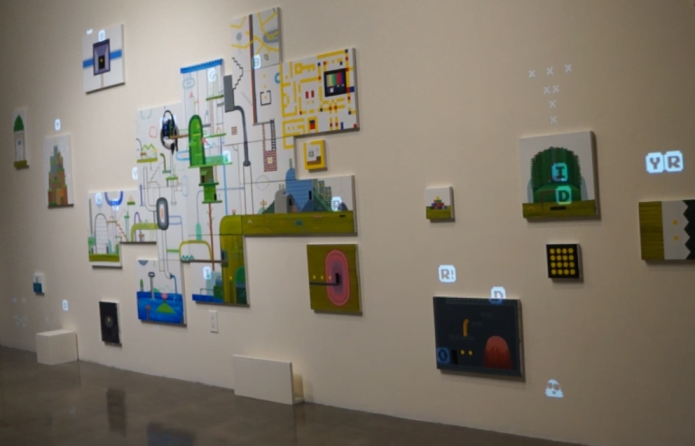 Brent Watanabe is a USA-based artist who makes computer-controlled and interactive installations. NEoN caught up with him to discuss the pieces he’ll be exhibiting in Dundee, his inspirations, and the significance of the bird motif in his work.

What exactly is a computer-based installation? When did you first create one?

My computer-controlled gallery installations consist of kinetic sculpture, drawing, projection, and sound, all controlled by custom computer programs. I’ve created a Morse code system that communicates through bells, chirps, and flapping wings; a collapsing room made from paper; and motorized birds made of typing paper and controlled by micro processors; as well as video game engines, holographic animals, floating cats, malfunctioning pastoral landscapes, and playable paintings. These installations are in constant flux and change. Nothing is predetermined. The characters, drawings, and sculptures rely on one another; communicating through means as simple as light or sound sensors to complex custom programming, circuitry, and Internet networking. Each element of the show has its own logic, intelligence, scoring, and goals. These elements include everything from the smallest robotic sculpture to projections and soundscapes enveloping the gallery. The installations also react to elements from their immediate environment, which have included police scanner radio feeds, gallery visitors, passing traffic, and the weather.

Do you consider the ability to programme to be essential to an artist’s skillset?

I don’t. For me it was essential, as I am a failed painter who could not realize his vision on the canvas. I found that I could not express time and movement on the canvas as I imagined, as many amazing artists have done, so I gravitated to film and video. In film and video, I was able to realize movement and time, but not variability. And that is what I found in programming… the ability to work with systems and variability.

What software do you use on a regular basis? If you’ve customised your computer apps, how have you modified them?

How long can your computer-controlled installations run without human interference or attendance?

Ideally forever. But each one is different, and they are all fallible. I was able to get the Deer Cam to run up to 5 days non-stop before crashing, which felt like an accomplishment, as I can’t imagine GTA V was designed for 5 straight days of playing. Most of my physical installations run for 8-10 hours before being shut down when the gallery/museum closes for the night. 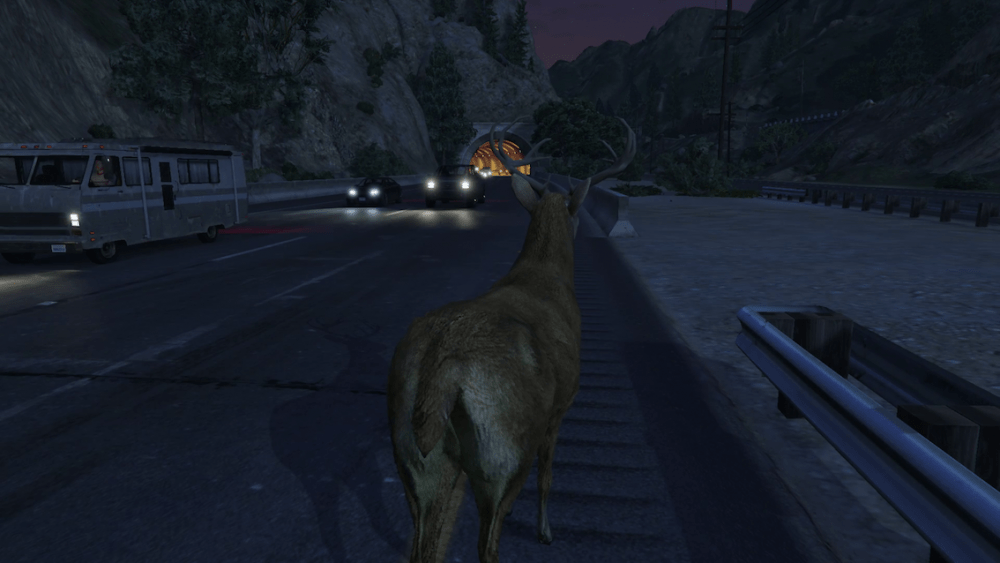 What attracts you to building installations? Are there any installations that have particularly inspired you?

I’m attracted to building computer controlled installations because I enjoy creating situations that a viewer can sit with for a long time, and witness it change and move, struggle and malfunction, succeed and fail. I’ve enjoyed creating physical installations that are open to the public, but because they’re typically located in a single location and open for limited hours, it greatly limits when, how, and where viewers can interact with the work. One of the reasons I presented the GTA V piece as an animal cam on the Internet was to attempt to reach a broader, more diverse audience – not just gallery or museum visitors.

I’ve been particularly inspired by the installations I’ve seen by Ed and Nancy Kienholz, as well as William Kentridge. I’ve also been greatly inspired and influenced by installation-like environments from my childhood; such as amusement park shooting galleries, theme park attractions, haunted houses, and restaurants with animatronic performers, like Chuck E. Cheese.

Many of your pieces, for example Dispose ();, Come Again, and operand, seem to be examining the way that waste and garbage are valued in our society. Are you intending to make a social comment, or is the choice to use things like plastic bags more aesthetic?

I’m definitely examining the relationships between consumption, waste, society, and the environment. It’s troubling to me, as I know it is to many people. My pieces lean more toward fables and fairy tales than a more political, activist vein. I suppose it’s my way of processing these issues, and figuring out how I relate to them. I hope it provokes viewers to also consider their relationship with waste and consumption.

What is the significance of the motif of birds within your work?

In the early 1990s I was a poster artist for rock shows in Seattle and used cartoon animal imagery, often cartoon animals trapped and in distress.

I inherited a cockatiel in early 2000s and was taken by her personality and the depth and complexity of her being. At this time I also began to teach myself to code. I think it was the confluence of those two things that led me to explore systems and simple AI in my work. The cartoon birds also represent the sentient animals I eat, and the way many of them are harvested. I suppose all of the birds in my work are trapped in one way or another.

What sort of work can we expect to see from you at this year’s NEoN? And what are you looking forward to about the digital arts festival?

I’m going to be showing two pieces at NEoN this year: the San Andreas Deer Cam, and Dispose( );. San Andreas Deer Cam is a live video stream from a computer running a modded version of Grand Theft Auto V, hosted on Twitch.tv. The mod creates a deer and follows it as it wanders throughout the 100 square miles of San Andreas, a fictional state in GTA V based on California. The deer has been programmed to control itself and make its own decisions, with no one actually playing the video game. The deer is ‘playing itself’, with all activity unscripted… and unexpected.

Dispose( ); is an open world video game played on 24 acrylic on canvas paintings, as well as the surrounding wall and floor. It is a Sisyphean survival game, with no imminent danger or challenges. You simply live, wandering and consuming and disposing. Dispose( ); is the second collaboration between myself and painter Cable Griffith.