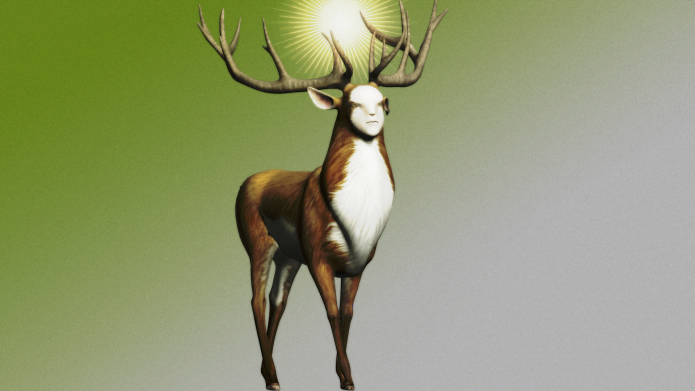 The significant early networked game The Endless Forest by Tale of Tales is a meditative repose, perhaps a remedy to the neverending digital deluge, as you roam aimlessly around a beautiful landscape in the form of a deer. You play as a magical human-faced deer and frolic through a beautiful forest landscape. You can communicate with other players through sound and body language, bleating to each other or dancing.

NEoN digital communications officer Ana Hine caught up with Michaël Samyn & Auriea Harvey, better known at Tale of Tales, to discuss the game and their involvement in this year’s NEoN festival.

What gave you the idea for The Endless Forest? Did you develop similar games beforehand? What games by other developers were you influenced by?

The direct inspiration for The Endless Forest came when we were on a train driving through the forest of the Ardennes. We had only worked on one game before. It was never released but it gave us a lot of ideas about what we wanted to do with the medium of videogames. Before videogames we had created many websites. As early internet users we had a warm fondness for the sort of anonymous contact that the internet allowed for. It is how me met and this aspect had featured in several of our net.art pieces. With The Endless Forest we wanted to create a place in cyberspace where people could meet without requiring our presence. Although we did add a feature that allows us, the creators, to enter the forest and conjure up all sorts of magical things.

At the time, World of Warcraft was one of the most important games around. And there were several other multiplayer environments where people would meet and play. But the inclusion of chat always bothered us in these games. Inevitably players were chatting about all sorts of things unrelated to the fictional environment, including verbal abuse. And there was a problem of different languages. That everyone plays a deer gave us the perfect excuse not to include chat in The Endless Forest. This greatly contributed to the peaceful and happy atmosphere of the game.

What is the maximum number of players you have had at any one time?

The server is designed for a maximum of 100 players. But we have exceeded that number a little on the occasion of some live performances. All sorts of things go wrong when that happens. But the local performance of the game also gets really bad with all those deer showing on one screen. This is one of the reasons why we are remaking the game with new technology.

Why did you decide to give the deer in the game human faces?

We did not. Our original plans were for a forest with naturalistic deer. But concept artist Lina Kusaite (see here) started drawing humanoid faces on them and nothing we said could make her stop. So we had the deer modelled like that and loved it. I think the look of the deer matches the magical atmosphere of the forest, an atmosphere inspired, among others, by the myth of Saint Hubert.

Where have you exhibited the game and which was your favourite?

The Endless Forest has been shown in many places all around the world and has been played by hundreds of thousands of people on their home computers. One remarkable occasion was at Museo Tamayo in Mexico City in 2007 where we did an Abiogenesis performance on the Day of the Dead with appropriately costumed deer in-game! But a clear favourite was the Artefact festival in Leuven, Belgium, as early as 2006. Not only had they put a screenshot of the game on the festival poster and co-funded the development of the Abiogenesis performance system, but they had also built wooden arcade consoles to our specifications on which visitors could play the game.

What are you looking forward to about NEoN 2018? Have you been to Dundee before?

It will be our first visit to Scotland. We are expecting great culture and good whisky!

We’re looking forward to seeing The Endless Forest presented in a wider context than videogames. And to talking about the remake of the game at the mini-symposium. We’re working hard now so we have lots to show and talk about.

What are your hopes for The Endless Forest in the future and are you developing any other games at the moment?

We hope remaking The Endless Forest goes swiftly and that the result will be technically so much better than the original that we can continue to expand the game again. We have so many ideas for it! We hope the community of players who crowd-sourced the funding of the remake will continue to be as supportive and patient as they are now.

We stopped making games a few years ago. Although some would claim we never made any games in the first place, that we made some other undefined kind of digital art. The most important distinction is perhaps that we do not release our work commercially anymore. Everything we make now is released for free. This helps us create art that goes further than we felt was possible within the videogames context. We are now focusing on Virtual Reality simulations and installations like Cricoterie, inspired by Polish theatre, and Cathedral-in-the-Clouds, inspired by religious themes in old master art and architecture.

Do you have anything else you want to add?

Thank you for completing the budget for the remake of The Endless Forest!

We know that lots of players would like to thank our Scottish patrons also, as it was for the Velocity Festival in 2007 that we created the Halloween costumes and the Big Zombie Deer, which still makes an appearance every year!

The Endless Forest will be available to play as part of the Weave by Abertay group show ‘Lifespans: Forever And Ever’ in Units 9-11 on the second floor of Wellgate shopping centre in Dundee during NEoN digital arts festival from Tuesday 6 November to Sunday 18 November. The mini symposium will take place at V&A Dundee on Friday 9 November from 11.30am – 4.30pm. Tickets can be reserved here.