Industry leaders offered their advice for students during the virtual opening ceremony on Twitch “Don’t panic, you’re going to be fine” said Robin Lawrence of Pocket Sized Hands, while Eilidh MacLeod of Fortitude Games urged graduating students to; “Just open yourself up to whatever opportunities for development are available, you’ll be way better for it. We want the industry to keep growing with passionate people.”

There’s certainly a lot of passion on display.

James Hunter has chosen to focus his honours project on accessibility, studying the features available across a number of games and making suggestions for best practice. These suggestions include: having an adjustable sound mix, allowing button remapping and tutorial replay, and having design choices that don’t solely rely on a single sensory clue – whether that’s sound, colour, or movement. “Accessibility features can help everybody, not just disabled gamers. They should enhance a gameplay experience by making it easier to play and understand. If you can design for a disabled user, you can design for everyone,” says Hunter, in a video prepared for his project. “Computer games are meant to be fun, but it’s no fun if you can’t even play them properly.”

There’s some beautiful concept art featured in the show. Heather Stirling’s ‘Hansel and Gretel – Visual Development Project’ reworks the Brothers Grimm fairytale, making the witch a kind-hearted old woman who chooses to feed the family rather than eating the children. Stirling’s notes show the level of thought that went into the character and environmental design, such as having cookery books and plants around the witch’s home to show her hobbies. It’s not surprising she’s scored a portfolio review with Hyper Luminal Games.

Angela Zawitaj received an honourable mention for her charming designs from Interference Pattern. Zawitai took advantage of the 3D printing facilities at the University of Abertay to create detailed moulds for her project ‘Forbidden Fungi’. Using these moulds she built clay models of her two main characters Num and Prin, who become friends despite being different types of mushrooms. 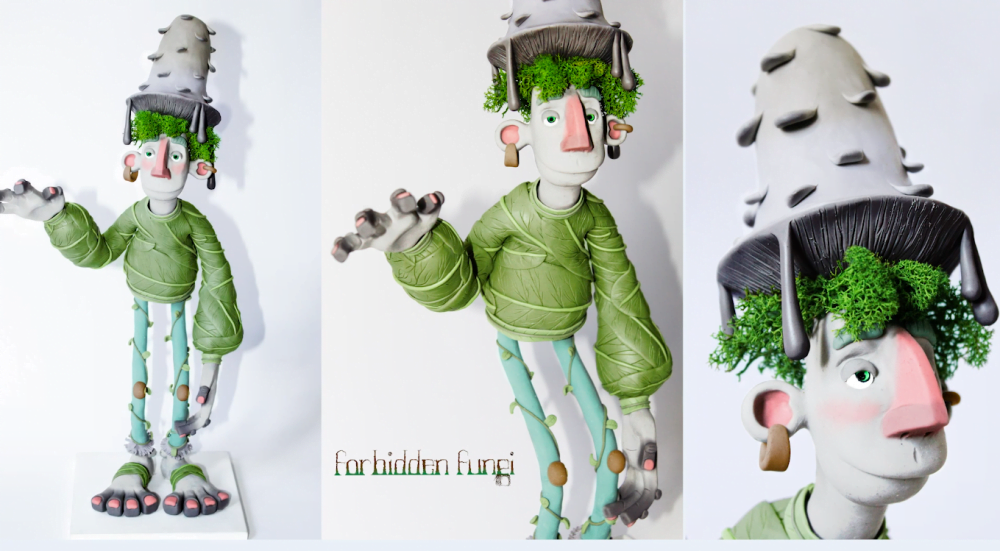 In terms of horror, Paul Wilson set out to scare himself with his delicately eerie digital paintings. There are tongues hanging out of broken jaws, glowing eyes staring from apparently empty sockets, tentacles, ghostly apparitions and so many teeth. “I didn’t manage to scare myself with them,” he said. “It was a lot harder to get what’s in my head onto the (digital) canvas than I hoped and they lost something in the process. Maybe having them in more dynamic poses with worms eye perspective could have helped. More extreme perspectives is something I plan on working on over the summer.” 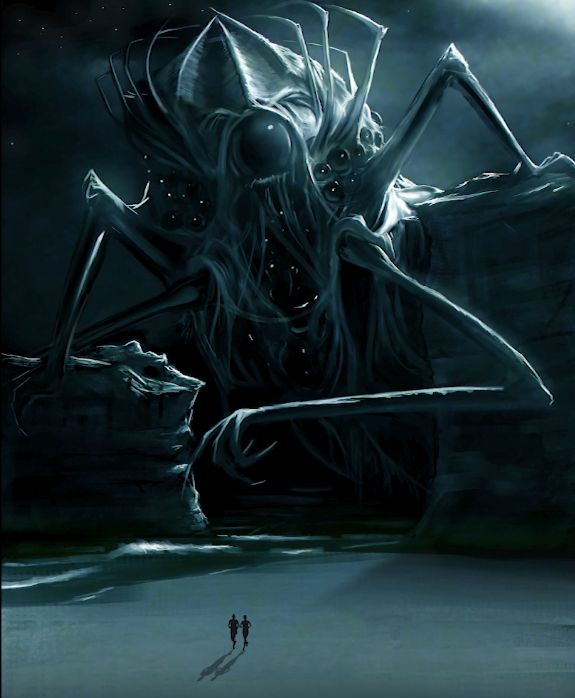 There’s a few books too. Kristin Cook has created an intricate journal of a fictional Victorian zoologist, detailing his increasing obsession with the fairies of Scottish folklore, while Matthew Jenkins has concentrated on the Moray Firth coastline where he grew up, and Elena Nikolova has made a children’s book about preserving the biodiversity of Earth’s waters. Sarah Melville even created a pop-up book about her cat, Goose.

For environmental concepts and location development, there’s a lot to like. Dawn Dawson attempted to recreate parts of the lost cities of Atlantis its Arabic equivalent – ‘Iram of the Pillars’. While Thomas Redwood won a prize from Interference Pattern for his project ‘Interdimensional’, featuring two distinctly different locations – one a calm and pleasant forest clearing with a magical, crumbling tower, the other a darkly intense cityscape with burning braziers and gothic architecture. The game is available to download on PC.

Some projects were not easily categorised, like Carla Begg’s short film ‘Left Behind’ – a moving portrayal of a mother and father grieving the drug-related death of their son. Craig Brown’s “Nightmare in the Marshlands: An adaptation from World War Z” recreates a chapter of the seminal zombie novel in a videogame format.

On a more technical note, Heather Cochrane took inspiration from the generative soundscape of No Man’s Sky to develop A.D.A.M, an ‘artificial neural network that produces ambient game music. Her intriguingly named dissertation ‘Can a robot write a symphony?’ is available to read for free online, via her website.

Jonathan Duncanson won a prize from Outplay Academy for developing a new programming langue ‘jc’. He explains; “In most other disciplines tools have gotten significantly better over time (level design comes to mind) and I figured why not attempt to improve this area for programmers. I designed a large amount of the language to have similar syntax to existing languages used for games programming (C/C++) so that a potential switchover would be easier, but it would be somewhat disruptive.”

Eilidh Brown used a scene from the 90s film adaption of Much Ado About Nothing to recreate the subtleties of human emotion digitally – from the raising of eyebrows to the tightening of lips. By analysing Emma Thompson’s performance she made a facial rig, creating an animated adaption of the original scene.

Unlike the physical iteration of the Abertay Digital Graduate Show, very few of the games are easily playable. Thankfully there’s James Meek’s text-based choose your own adventure ‘Seasons’, made using the free browser-based software Twine. You play as Dawn, a witch trying to heal her baby dragon Arcky. The game is simple, with beautiful, soft illustrations, and endearing enough that if you make the ‘wrong’ choices you’ll find yourself going back to the start menu to try all over again. Have a go yourself.

There’s also Alasdair Marnoch’s audio-only survival horror game ‘FHear’, which requires an Xbox or PS4 controller to play – though the two minutes trailer gives a good sense of what the game is like. The animal noises and creeping dread are reminiscent of the sci-fi film Annihilation. Scott Morrison’s project ‘Ascension’ aims to demonstrate the principles of 3D platformers, while still providing what looks like a fun gaming experience. A downloadable version of the game is available for PC.

Finally, in an odd quirk of fate, Niamh Loughran was listing the pros and cons of an increasingly common phenomenon – working from home – when the global pandemic turned many of us into remote workers overnight. With the PDF of her project report, ‘From Paris to Berlin: Remote Working in the Video Game Industry’, available for free her findings have never been more relevant. They even earned her this year’s ‘More Awesomer’ award in Game Developmentsponsored by local games company Ninja Kiwi.

“Funnily enough I researched remote working remotely,” said Loughran. “It’s a bit of a crazy story because I chose this topic all the way back in October or November last year, which was before anything Covid-19 related or pandemic related came out. And initially I saw it as a really interesting point of research because remote working – working from home or working in a pop-up office space – is quite popular, especially in Dundee… it’s quite an emergent practice but it’s starting to grow in popularity. It has a lot of benefits, like saving on office space, and they report higher productivity.”

“When I started researching it I noticed that there was a gap in videogame studies and remote working, it didn’t really overlap. There’s a lot of information on adjacent industries, but what inspired this project was to create a text for videogame development.”

Overall, the Abertay Digital Graduate Show 2020 manages to provide a solid platform for this year’s graduating students amidst challenging circumstances, and will be available to view online atwww.abertay.ac.uk/visit/weave-by-abertay/abertay-digital-graduate-show/showcase until 15 June, 2020.