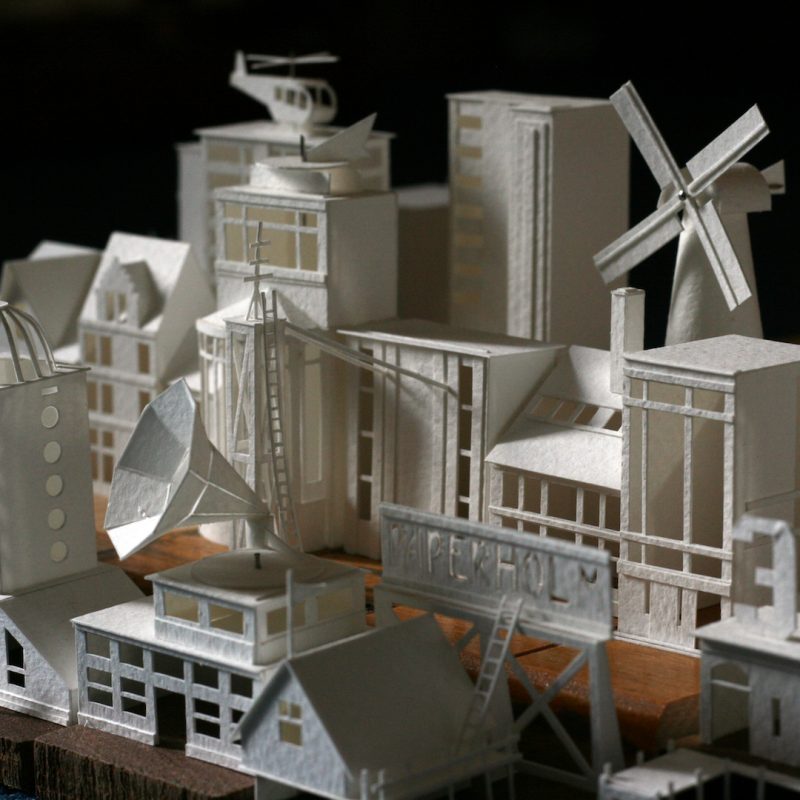 Physical urban space and virtual information space are inseparably intertwined. How does being digital change our sense of our spatial surroundings? Can we play in or animate the hybrid or glitched spaces in-between? Is there negative space in cyberspace?

NEoN 2016 brought a new media and digital art perspective to Scotland’s Year of Innovation, Architecture and Design, by considering these real and virtual environments. International artists explored and responded to the festival theme and considered alternative uses and futures for ‘The Spaces We’re In’, both virtually and materially. Dundee has always been a city in transition, and the digital media sector continues to be an important part of that reinvention.

NEoN interrogated the materials that make up our built environment – from air and glass, to cardboard and concrete to circuits and steel – and the designed devices we use to navigate it. As buildings and bridges seem to emerge readymade from the screen to real space, NEoN’s programme showed how ‘the digital’ helps us through the transition, or at least helps us to understand and critique it.

We presented The Nemesis Machine by London based artist Stanza whose work engages audiences in contemporary debates around surveillance, privacy, and big data smart cities. The Nemesis Machine installation used real time city data and embeded the audience inside the installation creating a participatory system, appearing like a city grid. Installations monitor behaviour, activities, and change information output, creating patterns and tracking flows, which speak to us about how we can come to know and understand the world.

American artist Brent Watanabe restaged his work Dispose( ); an open world game played on 24 acrylic on canvas paintings, as well as the surrounding wall and floor. It was a Sisyphean survival game, with no imminent danger or challenges. You simply live, wandering and consuming and disposing. Dispose( ); was a collaboration between programmer/artist Brent Watanabe and painter Cable Griffith. This also included an installation of his work San Andreas Streaming Deer Cam, a modification of Grand Theft Auto (GTA) V that creates and follows a deer wandering through the fictional state of San Andreas. The deer character is autonomous and wandered and responded to it’s surroundings, interacting with the existing GTA V artificial intelligence.

We were pleased to announce that we were working with the internationally renowned artists group Blast Theory. A two day workshop was led by Ju Row Farr, one of the founding members of the group, bringing together a diverse group of people from across Dundee and made an experience about architecture in the city. Blast Theory have a global reputation as one of the most adventurous artists’ groups using interactive media, and the workshop encouraged participants to think about new ways to interact with their city. The workshop deaw upon the people’s knowledge and stories of Dundee to formulate and construct an interactive experience.

Linda Havenstein from Berlin created a series of short video episodes based on a map of Dundee featuring the unit of Gigabyte per square kilometer (GB/km2). The consumption rate of GB/km2 is seen as an indicator of ‘social people’, high consumption means a good place for business, attracting more web consumption which in turn increases the gap between explored and unexplored areas, visible and invisible areas or groups of people and investment. Havenstein’s videos explored how this is having a strong influence on how physical space develops.

Malath Abbas, Tom Demajo, Albert Elwin, and Joseph DeLappe, presented ‘Killbox’ (2016) like never seen before. ‘Killbox’ is a two-player game on drone warfare. This project arose from NEoN’s partnership with international activist artist Joseph DeLappe and local game developers. The work, completion of which was funded by Creative Scotland and with a commission from Turbulence, was installed at Phoenix in Leicester and A-Maze in Berlin. NEoN brought the project back to Dundee for a full installation considering digital architectures and mapping of physical space and experience from the camera’s bird’s eye view.

The Travelling Gallery which featured ‘Alt-w: Blush Response’ a group exhibition of new work by ~ in the fields, Dennis & Debbie Club, Charles Young and Torsten Lauschmann. Whilst in Dundee for NEoN the gallery visited various locations including DCA where it interactde with further work from Charles Young installed in CentreSpace. ‘Paperholm’ is Young’s exploration of architecture through the daily design and production of now over 600 tiny models from 200gsm watercolour paper. in this world premiere they were presented together for the very first time as an imaginary archipelago city.

NEoN Digital Arts Festival was supported by The National Lottery through Creative Scotland’s Open Project Fund.  Commenting on the festival Morgan Petrie, Creative Industries Manager, Creative Scotland, said: “Creative Scotland is delighted to support the 7th edition of NEoN Digital Arts Festival.  NEoN has firmly established itself as a highlight within Dundee’s cultural calendar, offering an exciting programme of experimentation and innovation. The festival offers an important showcase for national and international new media and creative technology within Dundee.”

The full programme can be viewed here