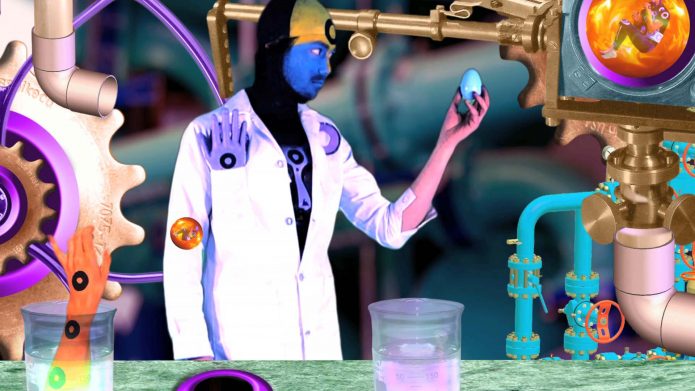 NEoN presented a day of music, installations and digital happenings in and around some of Dundee’s hidden spaces. The day was rounded off with a choreographed LED dance piece on one of Dundee’s most iconic landmarks.

The public was invited to join us for lunch at the Shore café were NEoN took participants on a digital journey across the city.

Rachel Maclean (Screening) – Everybody Knows It’s True. Everybody Knows It’s True was produced as a music video for the release of The Phantom Band’s single of the same name. Inspired by neo-classical sculpture, medieval alchemy and children’s television, the video by Rachel Maclean casts each member of the band as an element or participant within a larger mechanical/ chemical process.

NOMA (live performance)– John Cromar is a Glasgow based musician and writer. He has been active on the live scene for over 14 years and has recorded music since his early teens. He mostly performs solo, but is also a contributor to various duos and ensemble groups.

Noma live performances are known to involve the manipulation of household objects that are then fed through the pickups of a guitar. The music can be quite ambient, drone-based, industrial or more harsh, like power electronics.

Cromar’s music has been released on Kovorox sound (15 albums), At War With False Noise (3 albums) and various others. He has provided music for exhibitions, film, installations and two ballets and has performed all over the UK, Europe and Japan.

Dylan Drummond’s (screening) Keep The Faith is a documentary film made in Dundee that focuses on the city’s Northern Soul scene. This music movement was strong in the 1970s and saw young people from the different housing schemes of the city, normally very territorial, come together to dance all night until dawn to the sound of Northern Soul music.  The Northern Soul scene in Dundee is a genuine grassroots culture that is rightly protective of its loyal community. The film pays homage to the hundreds of ‘Auldies’, as they call themselves, who still gather to dance the night away, some 35 years after the very first all-nighters in such landmark buildings as Dundee’s Marryat Hall.  Dylan Drummond, the director of the film, took the unusual approach of sharing segments of the film publicly during the production stage to establish trust with the Northern Soul community. “My hope is that they can truly see the film as collaboration, “ says Drummond. “The way that the soul community have stayed true to their rich and positive culture is a beautiful and inspiring legacy.”

Tom De Majo (sound installation) – Sound Design artist Tom De Majo used one of the oldest buildings in Dundee as a resonator for a new installation that brings to life the echoes of its past.

Jung In Jung (performance)– Physical gestures and movements generated sound in this atmospheric performance. By manipulating gaming technology the dancers sculpted sound in real-time, and explored how layers of sound interact and develop a narrative reflecting the subterranean environment of the performance space.

Sound installation – Listen to the stars via a technique called “stellar seismology“, popular among astronomers because captured sounds give an indication of the stars’ interior. Electromagnetic waves emitted by a star are converted to sound waves to give another dimension to Dundee’s well-loved Planetarium!

Robert Law, Visitor Assistant at Mills Observatory, also gave an insight into the lights and sounds of the universe.

Stefan Blomiere(performance) – recently his self-released seven-inch single Popular Electronics II / Radio Astronomy drew many plaudits from electronic music afficionados and his live performance at the N_ilk festival using purely vintage analogue equipment left those who saw it in a state of blissful rapture. For 2011 NEoN festival Stefan performed a brand new work in the dome of the Mills Observatory, using his trusty arsenal of vintage equipment and sharp ear for a tune.

Journey to the Law

LED’s, movement, sound and image were brought to life one of Dundee’s most loved landmarks. Using 60 local dancers this large-scale performance took its references from the festival theme, collaboration and the nature of complex patterns created from interaction. With choreographed glowing hands moving to an original score produced by local musicians Andrew Mitchell and Raz Ullah, this was a highly-charged and powerful visual experience.

Tagtool (live animation) with Alistair Wilson was a performance-driven visual instrument used on stage and on the street. It served as a VJ tool, a creative video game, or an intuitive way of creating animation.