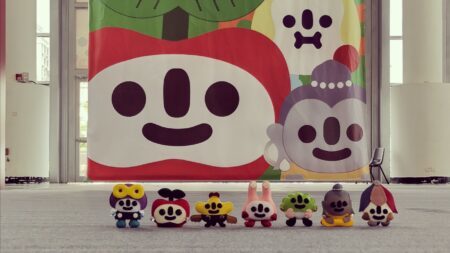 Seven small plush like toys standing on a white floor. From left to right; A purple figure with a white face and yellow figure eight ( on its side) on its forehead, the second figure is shaped like an apple and coloured red, the third figure has a yellow face with large ears and brown wings, the fourth figure is pink in colour and has 2 vertical pink ears, the fifth figure has a green cloud shaped head, the next figure has a brown face and hair in a bun shape wearing a yellow dress, the last figure is wearing a Jester type hat which is coloured purple,pink and red. In the background is a large illustration depicting the aforementioned characters.