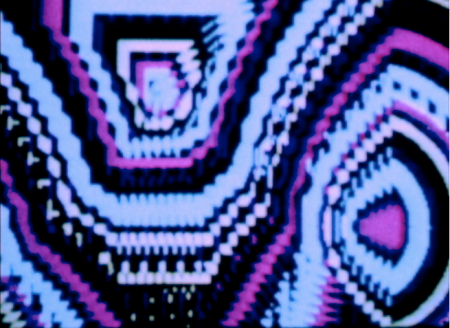 NEoN festival of Digital Arts asked how do you ensure your story is remembered in the future? One tactic is to share it more widely. With a theme of FUTUREPROOFING, NEoN 2014 looked back across the recent history of digital art at the same time as it tried to share its support for digital art production more widely across Dundee. The festival included exhibitions of work by international artists, screenings, a mini-symposium, artist talks, workshops and closing night party to which you were able to bring your own digital content and projector.

We were delighted to welcome the expertise of guest curator and media art historian Sarah Cook and the support of New Media Scotland, the national development agency fostering artist and audience engagement with all forms of new media practice, who have in turn invited in other exhibition curators including Nora O’Murchu from the Glitch Festival in Dublin, all of whom have helped share the programme of digital art with other festivals and organisations across the city.

This widening of the team meant more people – artists and audiences – experienced the ever-fleeting forms of digital art, and ensured its legacy in their own memories. While we all remember our first mobile phone or game console, do we remember the software we experienced on that hardware – and the creative uses to which they are put?

199 years since the birth of Ada Lovelace, who is credited with being the first computer programmer, the flagship exhibition – Coded After Lovelace – brought together the work of pioneering female computer artists who have forged new ground in their respective fields, not only embracing new technologies, but also inventing new forms and uses for them. Coded After Lovelace guest-curated by Nora O’Murchú and Faith Holland sought to bring greater visibility to the work of women artists who have often been left out of histories of art and technology.

The field of cryonics – the practice of freezing people after their deaths – was explored in an illustrated talk by photographer Murray Ballard. His images in The Immortality Series took the viewer on a journey through the tiny but dedicated international cryonics community who hope that one day medical advances will mean those they are preserving can be brought back to life.

The mini-symposium on Friday 7 November, Show Us Your Assets, brought together academics and artists to debate the best ways of ensuring knowledge about digital art is preserved as well as the works themselves.

The week-long festival was launched with Smart Materials expert and local artist Sara Robertson’s interactive ‘Crafting Light’ workshop on Sunday 2 November. The workshop was a chance for anyone interested in wearable technology to learn more about it, the science behind it, and how to craft their very own fibre optic designs.

The festival closed with BYOB (Bring Your Own Beamer): a one-night extravaganza that saw 6,944 sq ft of the Vision Building covered from floor-to-ceiling in a patchwork of light, colour and sound. BYOB was an open-source event that was founded by New York based visual artist Rafaël Rozendaal in 2010. The concept is simple: find an exhibition space, invite artists and ask them to bring their projectors. Feature films, animation, performance art and more is projected onto every available surface of the building, in a 360 degree experience that will saturate the viewer’s senses.