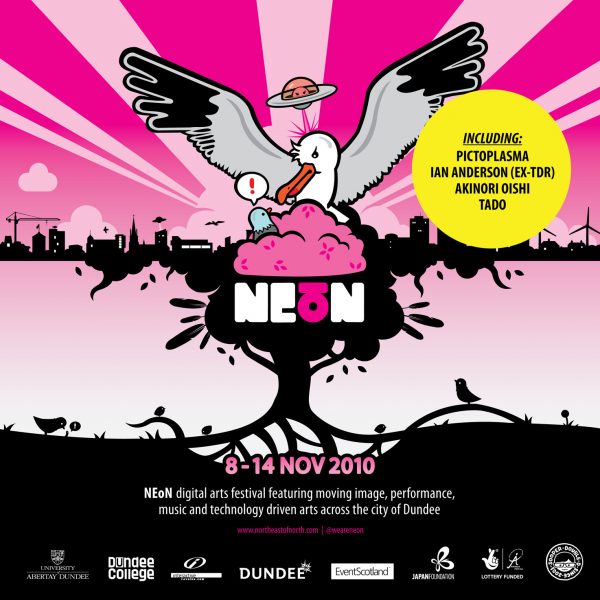 NEoN digital arts festival 2010 adopted the theme of ‘character’ and featured appearances from Akinori Oishi and Pictoplasma, with contributions also coming from EIDOS and tDR. Running from the 8th until 14th of November, the festival consisted of talks, workshops, exhibitions, screenings and performances at many of Dundee’s cultural, business and public spaces, including the city’s Centre for Excellence.

The over arching curatorial theme was Character: evaluating the abstracted or physical agent in a work of art; investigation of the fictional or psychological systems; observation of the unit of information, symbol, sound or written language. Through this focused dimension NEoN explored the notion of collaboration between visual art, information communication, media production and gaming that would expand digital development and knowledge.

NEoN exchanged knowledge in key areas such as new business models, digital developments and latest production techniques. It expanded on the notion that art, digital media and games communities can come together to explore new collaborations and open up new levels of opportunities. NEoN showcased new technology, new software and new art forms that inevitably had a developmental and cultural impact on the sectors context and encouraged growth in many areas.

NEoN offered work placements to local students and they worked on a verity of things such as web development, marketing and logistics. Here is what some of them had to say …

“I am excited to be involved in NEoN purely for the fact that digital media is the now and will keep growing, and to be a part of one of the biggest up and coming festivals in the field is unbelievable not to mention a good laugh.” Tommy Stewart

“I see NEoN 2010 as a great opportunity to promote Dundee’s design and creative community and I wish to be part of it.” John Patterson

We were also lucky to have on board Asuka Miki who was at the time studying towards her MSc Animation and Visualization. Before coming to the UK Asuka worked in the media industry in Tokyo. She spent 10 years as an animation production manager and web director for 2D animation and entertainment websites. Asuka was working along side our marketing team and tackling the UK media.