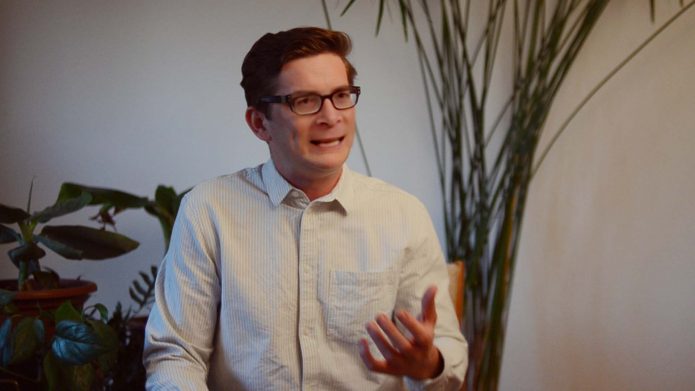 Utopia Generator 1.1 is a video which was created using deepfake [1] algorithms. In the video the Swiss right wing politician and journalist Roger Köppel can be seen talking about climate politics. Roger Köppel is well known for his ‘climate-scepticism’. He regularly states that he does believe climate is changing, but doubts that human actions are the cause for this. To support his thesis, he often cites the American scientist Richard Lindzen, who has received financial support by the coal industry and is critisised for his statements about climate change by his peers.

The work itself lets a fake-Köppel come to completely different conclusions within his arguments than the real one.

This is a reaction of the artist to how the arguments of right wing politicians often do not make sense if you put them in a broader context of their usual propaganda (e.g. right wing parties are against migration and climate change will cause mass migration). The work should get people to rethink the arguments made by politicians to understand if the arguments are sound.

Another topic that the video examines is our trust in democracy. With deepfake-videos, real-looking fake content can be easily created. Whether the video is a fake or not is hard to understand by a person without much knowledge of these processes. Thus such fake videos can become a danger to people‘s trust in our systems.

[1] deepfake-algorithms are algorithms in the real of machine learning which allow to exchange the faces of two people within a video.

About the Artist
Julia Schicker was born 1992 in Zug, Switzerland, a town known for low taxes and large companies not always operating with high moral standards. The recurring theme of her work are power structures. During her bechelor’s degree in fine arts, she explored these structures in combination with post-colonialism and Switzerland’s involvement in resource trading and the wealth accumulated by it. Following her degree in Computer Science, she now focuses her work on the intersection of technology and politics.Together with AnnaFlurina Kälin, she organises talks at the department of Computer Science of the ETH twice a year. The series of talks with the title  ‘Art & Computer Science’ invites artists who explore the boundries of traditional art and the digital, in order to spark discussions between artists and computer scientists.