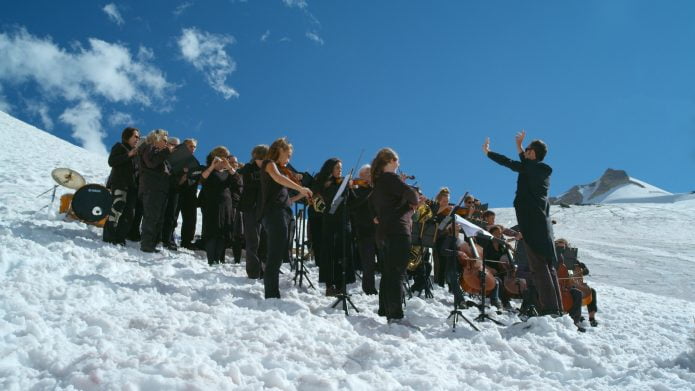 Records and Wireframes presents moving image works by artists Paul Dolan (UK) and Paul Walde (Canada) alongside skeletal remains of the extinct Tasmanian Tiger, on loan from the collection of the University of Dundee’s D’Arcy Thompson Zoology Museum. Curated for NEoN by artist Kelly Richardson to accompany her exhibition at DCA, ‘The Weather Makers’, ‘Records and Wireframes’ explores themes around climate change and screen culture with allusions to the past, present and future.

In the expansive video installation Requiem for a Glacier (2013), Paul Walde memorialises British Columbia’s Jumbo Glacier, or “Qat’muk”, now under immediate threat from global warming and resort development. The work shows a four-movement oratorio performed by an orchestra and chorus atop the area’s Farnham Glacier. Over thirty-seven minutes, Requiem for a Glacier features panoramic glacier views alongside the oratorio that was composed by converting data such as temperature records for the area, into musical notation.

The theme of disappearing landscapes, and data as a form of media archaeological artifact, continues in Paul Dolan’s real-time video work, Wireframe Valley (2017), which presents the gradual disappearance of a digitally constructed landscape, revealing its virtual origins. The defining features of the landscape degrade over the exact duration of the exhibition. In the context of global warming, where the physical planet is increasingly incapable of sustaining life as we know it, our refuge amongst digital environments may not placate us for long.

Should we fail to alter our course, predictions for the fallout from large-scale, unchecked industry are nothing short of terrifying. Some scientists believe that a 6th mass extinction event is already underway through the “biological annihilation” of wildlife in recent decades. Recent studies suggest that the Tasmanian Tiger’s extinction in the 1930s was itself caused by drought.[1] Due to human overpopulation and overconsumption, roughly 50% of the earth’s wildlife population has been lost during our lifetime. A recently published study in the peer-reviewed journal Proceedings of the National Academy of Sciences forgoes the usual sober tone and refers to the gravity of the loss as a “frightening assault on the foundations of human civilisation”. [2]

Carrying on from themes explored in Kelly Richardson’s exhibition The Weather Makers at DCA, Records and Wireframes shows the work of artists who, through their art, are creating digital records expressing how we understand our world today. These art works, like the fragmented thylacine skull, may become artifacts that future archaeologists consider in their search to appreciate how, in 2017, inhabitants of Earth understood the global environmental crisis facing them.

Paul Walde is an intermedia artist, composer, and curator. His work has been exhibited across the United States and Canada, including View From Up Here: The Arctic at the Center of the World at the Anchorage Museum, Anchorage, USA (2016), All Together Now at the University of Toronto Art Centre in Toronto, Canada (2014); Beyond/In Western New York (2007), a biennial organised by the Albright Knox Gallery in Buffalo, USA;. His work is held in several Canadian and American collections including the Museum London, Canada and the Anchorage Museum, Anchorage, USA. Walde currently lives and works in Victoria, British Columbia, where he is Associate Professor of Visual Arts and Department Chair at the University of Victoria.

Paul Dolan is an artist, animator and musician, interested in the materiality of media and how it relates to ideas surrounding ‘nature’ and ‘environment’. He is a current PhD candidate at Northumbria University where he is exploring changing notions of materiality within computer simulation-related contemporary art. Wireframe Valley (originally from 2015, reproduced in 2017) was commissioned by Queens Hall (Hexham, England) and included in the exhibition Land Engines alongside established artists using video game design tools to create works that explore computer generated landscapes, including David Blandy (UK), Jen Southern (UK) and Mark Tribe (USA). He currently lives and works in North East England, where he is Senior Lecturer of Animation at Northumbria University.

Supported by the High Commission of Canada to the United Kingdom