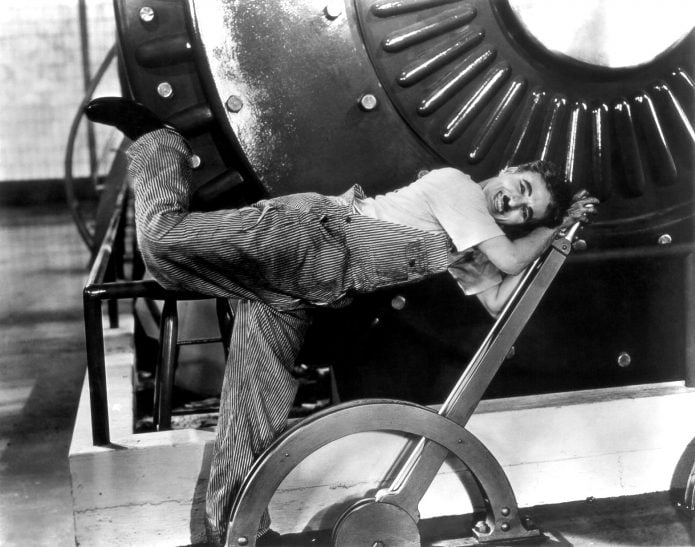 
2017 has been designated Scotland’s Year of History, Heritage and Archaeology, and as part of the NEoN Digital Arts Festival we’re turning the clock back to 1936 when Art Deco cinema Green’s Playhouse first opened to the public on the site of the Mecca bingo hall.

Step inside the iconic tower to watch Charlie Chaplin’s 1936 silent comedy ‘Modern Times’ as the silver screen returns to the site of the original Playhouse for one night only. You’re encouraged to dress like the iconic ‘Little Tramp’, and join us for bingo before the main feature from 6:30pm.

‘Modern Times’ depicts the struggle to preserve humanity in a modern, mechanised world. The comedic mayhem that ensues has ensured that this remains one of Chaplin’s greatest and most enduring works, a tribute to the silent-film era he commanded for a generation.

Green’s Playhouse was designed by Joseph Emberton and John Fairweather. It was the second largest cinema in Europe with 4,126 seats. It’s tower was a fore-runner of Glasgow’s Tait Tower at the 1938 Empire Exhibition, and was the only thing to survive the devastating fire of 1995.

Free but tickets are required

This special screening is free and begins at 9pm. If you wish to come and play bingo from 6:30pm you'll need to join Mecca online or by signing up at the hall.