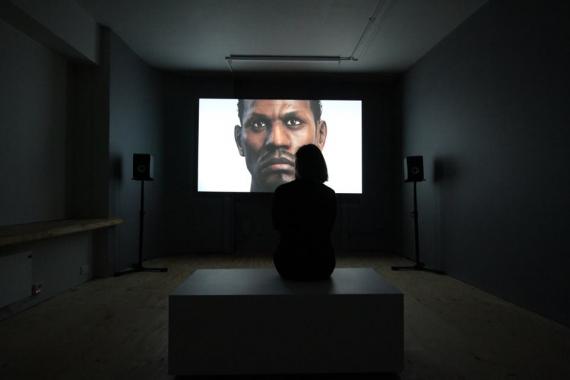 Genetic Automata by Larry Achiampong and David Blandy forms the first part of an ambitious new body of works by the artists, exploring race and identity in an age of avatars, video games, and DNA Ancestry testing. Initially commissioned by Arts Catalyst, this exhibition will be shown during NEoN Festival as part of a national tour.

Referencing the history of the theory of evolution, and the relationship between Darwin and his taxidermy teacher John Edmonstone, a freed slave, Genetic Automata raises important questions of invisible histories, eugenics, and segregation, through the lens of historical and contemporary contexts. The video installation combines animation, spoken word and text interspersed with microscopic topographies of varied shades of skin, digital renditions of skin from video games, and film footage of taxidermied bird life from Darwin’s bird skin collection at the Natural History Museum.

Sensor by emerging artist Toby Jackson is an extension of work that he has been developing over the past few years, highlighting the relationships between humans and computers; lived experience, and its digital manipulation. Sensor will use live capture 3D mapping to create an interactive projection which maps and distorts the audience’s movements, dictating the ways in which we interact with the work. The projected images will reference digital avatars via the visual simplifications of those who interact with it, questioning ideas of identity, privacy and anonymity in a world of digital surveillance.This relationship between the artwork and the audience will highlight the precarious power dynamic that exists between humans and computers, encouraging us to disrupt this dynamic, and reclaim control of our own narratives.

Each of these exhibitions discusses the insidious ways in which narratives can be altered and sculpted in order to disseminate ideas which negatively influence collective thinking. encourages us to reconsider our interactions with technology in order to combat this deceptive influence. Genetic Automata urges an awareness of the ways in which historical omissions can contribute to contemporary issues, particularly in relation to racial discrimination and segregation. Ultimately, these exhibitions combine to encourage a heightened awareness of the responsibility that each of us hold to question the information that we are forced to consume.

About the Artists
Larry Achiampong  & David Blandy’s work has been shown both within the UK and abroad including Tate Modern, London; The Baltic, Gateshead; Yorkshire Sculpture Park, Wakefied; Fact, Liverpool; BFI London Film Festival, London; Transmediale Festival, Berlin, Germany & Fort Worth Contemporary Arts, Texas, USA. They have been on residencies at Praksis, Oslo in Norway & Wysing Arts Centre, Cambridgeshire. Recent awards include an Elephant Trust award and support from Arts Council England. They have been shortlisted for the Film London Jarman award 2018. Larry Achiampong is represented by Copperfield Gallery, London & David Blandy is represented by Seventeen Gallery, London.

Toby Jackson is a Scotland-based digital artist, who uses innovative technology to create installations which are both interactive and generative. Jackson’s work explores themes of identity, self-expression, surveillance, and censorship, and the ways in which each of these affects – or is effected by – abstract representation of the self in our digital age. Following the critical success of his most recent work Blind Eye, this exhibition marks Jackson’s first solo show since graduating from DJCAD earlier this summer.