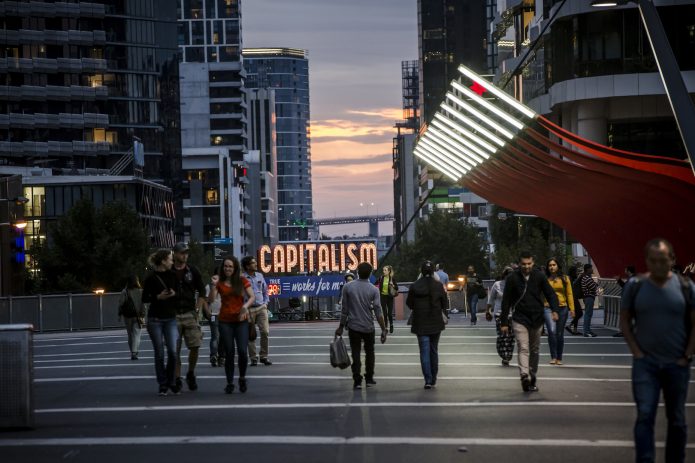 A 20-foot by nine-foot red, white and blue retro-styled illuminated scoreboard, by Art Activist Steve Lambert, with the slogan “Capitalism Works for Me!” with a podium to allow viewers to vote whether “in my life,” the statement is true or false. The votes are displayed on the scoreboard. This outdoor installation will initiate a direct conversation about capitalism with the people of Dundee.

Originally created at a SPACES World Artist Residency in Cleveland, Ohio with the encouragement of the deCordova Museum and Sculpture Park in Lincoln, “Massachusetts”with the support of 434 Kickstarter backers, Artist Steve Lambert is asking us; “How has capitalism worked out? Did everything go according to plan? Are we all better off? Could we do better?”

As a culture, we need the vision and boldness it takes to discuss the problem itself. The idea that “there is no alternative” to the way our world works takes away our ability to dream. As citizens we need the courage to begin these discussions on order to move on to new and better visions for the future.

This is what art is for. This is what art does well. It creates creates a space where new ideas and perspectives can be explored. A space unlike any other. And don’t worry, an Invisible Hand can’t push the buttons that change the score. Only you can do that.

About the Artist
Lambert has worked alongside over 1400 artists and activists, in 16 countries, on four continents helping them use creative means to effect power. Trained in the arts, he is known for large scale, public projects that engage new audiences on difficult topics through the social science of comedy, games, theater, and democratic participation.

Lambert is the co-founder and co-director of the, a research and training institute helping activists be more creative and artists be more effective.

As an artist, Lambert’s work has been shown both nationally and internationally, from art galleries, to Times Square, to protest marches, featured in four documentary films, and over two dozen books, and collected by museums and The Library of Congress. Lambert has presented at the United Nations several times. His research is included in a United Nations report on the impact of advertising on cultural rights, as well as the basis for a book on popular understandings of capitalism.