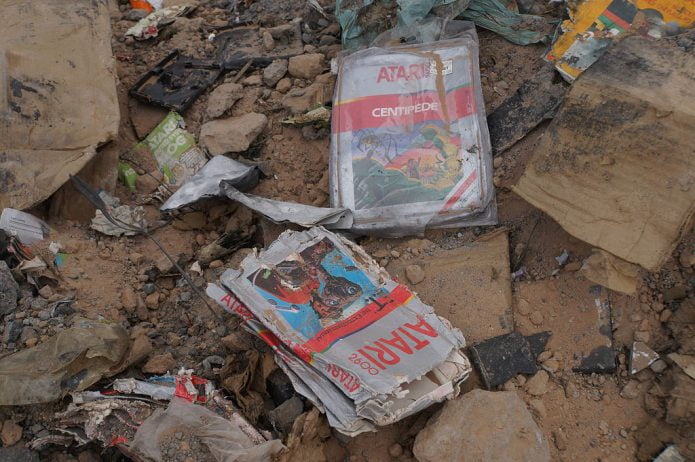 
For this documentary, the filmmakers excavated the landfill site in Alamogordo, New Mexico, where many E.T. game cartridges were buried. The excavation dig took several months of preparation, and was finally carried out on April 26, 2014. Although the digging had only been planned to go as deep as 18 feet, it actually went to 30 feet. Around 1,300 of the approximately 700,000 games buried were unearthed.

The dig lasted for approximately three hours. Only a small number of games could be recovered, because the local authority of Alamogordo only allowed the dig to last for one day, and ordered the site to be closed by April 27.

700 of the 1,300 games unearthed during the excavation will be sold by the Alamogordo City Commission, and 100 will be given to the film’s development companies, Lightbox and Fuel Entertainment. Alamogordo mayor Susie Galea now hopes to turn the dig site into a tourist attraction.

The remaining 500 games were given to the Smithsonian Institution in Washington, DC and local New Mexico museums to be displayed.

Geekwire criticised the way that the film oversimplified Atari’s downfall, but awarded it an overall positive review, saying “It’s still a great story, and definitely worth watching.”