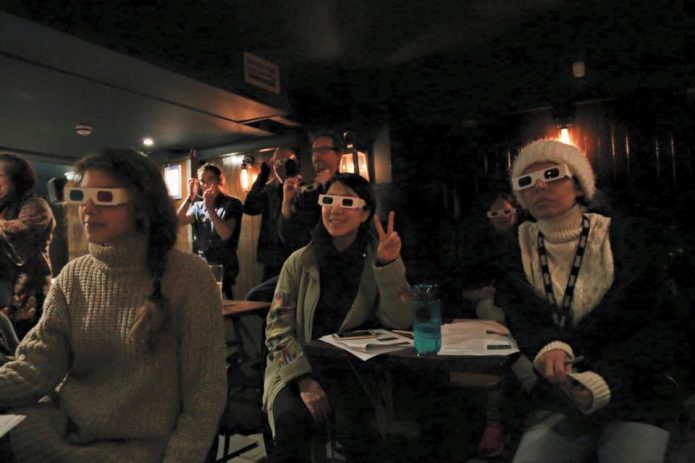 A curated series of national and international artists’ shorts reflecting the festival theme of Lifespans including future of visions of AR, the start of a revolution, and the future of dance.

Gina Czarnecki, Infected (2001) 8 mins.
Infected is a film about the nature of the physical body in the context of future technological possibilities, seen through dance and digitally manipulated imagery. The new bio-engineered body is still an sexual, organic, stark, brutal, pounding system. It is beautiful, repulsive, indulgent, curious, emotional, un/controlled, breeding, changing… Is this a futuristic vision of the human body infiltrated and changed, ‘infected’ by biotechnology? Or is the reverse happening? Is the human body, the warm-blooded body of sinews and emotions, corrupting the ‘pure light’ of technology? Infected features Scottish dance artist, Iona Kewney, and a specially commissioned score by Fennesz.

Floris Kaayk, The Order Electrus (2005) 7 mins. 35 sec.
The Order Electrus is a fictional documentary which shows Floris Kaayk’s imaginary world of industrialised nature, situated in a derelict area of the Ruhr in Germany. Due to overcapacity in production systems, many factories in Germany were forced to close down. Over the course of many years these derelict industrial areas became a breeding ground for an electrical insects species, also called the Order Electrus. These insects evolved through the merging of nature and technology.

Mike Pelletier, Still Life (2017) 4 mins. 7 sec.
“This animation combines my interest of contemporary technological forms with the more classical form of still life painting. What attracts me to still life paintings is how the paintings can study the form of their subject but also reveal much about how they are made. The quality and materiality of paint exist on equal footing with the study of light, color and form. I took inspiration from the term “still life” itself, by focusing on the idea of stillness. I also took inspiration from how the term is expressed in French as “Nature Morte,”  which can be literally translated to dead nature. In this animation the stillness, unnaturalness and deadness of these virtual objects becomes the focus of the piece.”

Liat Berdugo and Emily Martinez, Making You (2016) 7 mins. 32 sec.
“Anxious to Make is the collaborative practice of Liat Berdugo and Emily Martinez, two commissioning bodies. Our focus is on the so-called “sharing economy” and the contemporary artists “anxiety to make” in the accelerationist, neoliberal economic landscape. While Anxious to Make’s physical existence takes many shifting forms, it often manifests as a series of video commissions, downloads, online generators, workshops, net art interventions, and sweepstakes. Anxious to Make believes in absurdist extremes as way to examine contemporary realities. Our work has appeared recently in The Wrong Biennale, Transmediale (Berlin, DE), Yerba Buena Center for the Arts, MoMA PS1, V2_ Institute for the Unstable Media, WRO Media Art Biennale and The Luminary (St. Louis, MO).”

Keiichi Matsuda, Hyper-Reality (2016) 6 mins. 15 sec.
Our physical and virtual realities are becoming increasingly intertwined. Technologies such as VR, augmented reality, wearables, and the internet of things are pointing to a world where technology will envelop every aspect of our lives. It will be the glue between every interaction and experience, offering amazing possibilities, while also controlling the way we understand the world. Hyper-Reality attempts to explore this exciting but dangerous trajectory. It was crowdfunded, and shot on location in Medellín, Colombia, and presents a provocative and kaleidoscopic new vision of the future, where physical and virtual realities have merged, and the city is saturated in media. It is the latest work in an ongoing research-by-design project by Keiichi Matsuda.

Francois Knoetze, Core Dump (2018) 11 mins. 45 sec.
Core Dump explores the place of screens in global and localised politics and history, looking specifically at the contradiction of Silicon Valley’s techno-utopianism and its impact on the low-tech manufacturing bases of Africa. The project comprises a series of performances, projection-mapping video installations, and interviews that draw from audiovisual archives, early African cinema and the daily life of the cities of Dakar and Kinshasa. These two cities represent both the origin points of mineral extraction for materials used in the production of technology, and the end points at which certain African countries become dumping grounds for electronic waste from Europe and the USA which is then often repaired, re-purposed and reused. In contrast to the spectacle of technological singularity and the Western myth of progress, Core Dump considers the connections, disruptions and contradictions inherent in these ideas, through conflicting designations of value and waste.

Bex Ilsley, Codex (2016) 3 mins. 30 sec.
Bex Ilsley is an artist based in Coventry. Her practice explores the nature of body and personality in virtual, physical, and psychological spaces. Fantasy, performativity, objecthood and paradox are used as a lens through which to examine the authenticity of these structures. Codex was filmed in April 2016 in Grand Rapids, Michigan, USA, on The Moon, a multidisciplinary arts space. It was produced In collaboration with Los Angeles based videographer Bokeh Monster and INTERSPACE, a student arts organisation from Kendall College of Art and Design. The film is a re-interpretation of a specific illustration from Luigi Serafini’s 1981 book Codex Seraphinianus, updated as a music video for the social media age. Music: King Gizzard & The Lizard Wizard – ‘Work This Time’

Mary Maggic Tsang, Egstrogen Farms (2015) 1 min.
Egstrogen Farms is a tactical media project that addresses the domestication of women’s reproductive abilities by the biotech industry, including hormonal therapies in the assisted reproductive technology (ART) sector. Presented as a fictional company, a parodic diversion of exchanges between species, Egstrogen Farms markets genetically modified eggs that produce a “cocktail of gonadotropins” to allow women to ovulate as frequently as chickens do. Inspired by the work of collectives such as subRosa or Critical Art Ensemble, Egstrogen Farms delivers a critique on the current commercialization of reproduction and expands the symbol of the egg as a therapeutic, nutritional and reproductive matrix.

Benny Nemerofsky Ramsay, A Short History of My Art Practice (2016) 15 mins. 17 sec.
In answer to the question, what is it that you do? – perennially asked of contemporary artists – Nemerofsky summarises fifteen years of professional practice in fifteen minutes, describing and re-embodying key artworks in his sound- and video-centric work.