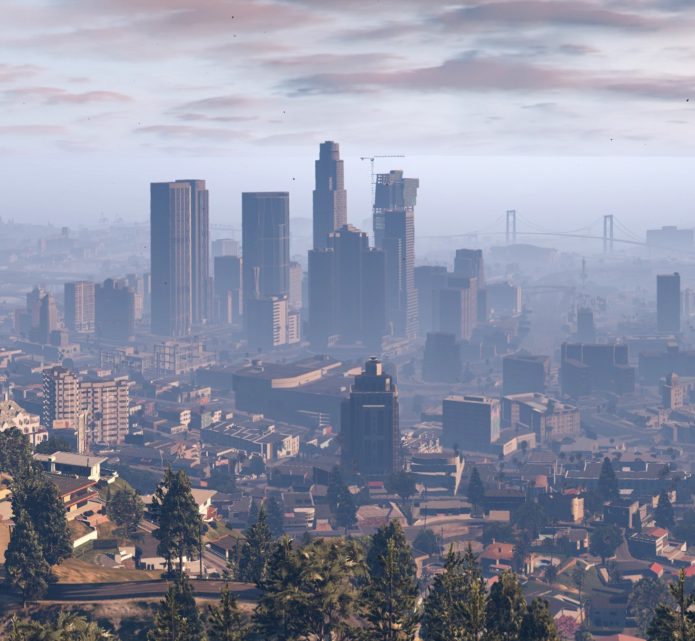 Aram Bartholl’s new commission for NEoN, an installation titled ‘8k’, includes a large-scale printed screenshot (12 meters long) of a scenic view of ‘Sin City’ from the computer game Grand Theft Auto 5. A car parked in front of the billboard offers visitors to take a seat, enjoy the view of the vast digital city scape while listening to an audio collage of youtubers playing the game.

Grand Theft Auto is an open world action-adventure video game series created by the game developer Rockstar games. The name of the series makes reference to the term used in the USA for motor vehicle theft.  British video game developer DMA Design began the series in 1997 in Dundee. The third chronological title, Grand Theft Auto III, released in 2001, was widely acclaimed, as it brought the series to a 3D setting and offered a more immersive experience. The series has gained controversy for its adult nature and violent themes.

The vast open world of GTA 5 offers total free interaction for the player and is like a huge playground with no moral boundaries. As a result, players tend to test the limits of what you can do in the game. YouTube hosts a massive collection of GTA 5 videos in which players often hysterically ‘go nuts’. The ‘City of Sin’ in GTA 5 serves as a metaphorical excess flow valve, a projection plane and a mirror of today’s society which has become increasingly regulated and controlled.