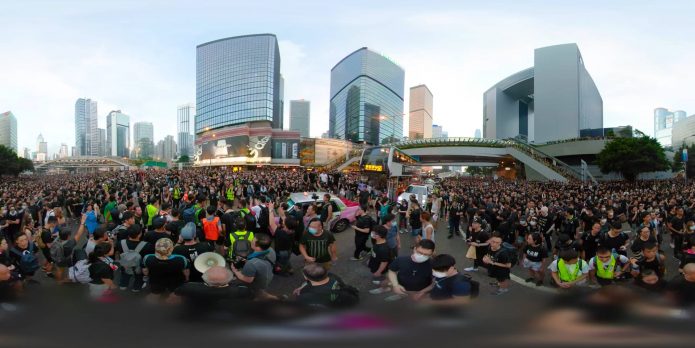 In times of protest and collective social action, documenting dynamic visual journeys can be difficult both because the bulk of equipment involved makes access a problem, and because traditional 2D film-making fails to capture the surprise and full 3-dimensionality of the situation. Given the portability of 360 cameras and the capabilities of storytelling in VR using spatial audio and immersive experience, 360 filmmaking for investigative work will open a door way to allow participants in social actions to express themselves in previously inaccessible environments with capability to immerse the audience. To model such a situation in Dundee, Scotland, we propose to use a shopping mall and civic square in Dundee as structures emulating social protests against authoritarian regimes. We will put “government silos” at a point in a shopping mall as representing a hub of protest activity. Two groups will be given 360 cameras that they can pass between group members. They’ll be entrusted with making a 360 film that will be viewable in VR and on the projector at the conference about accessing the civic square, which serves as a model for the legislative centres that are the focus of the protest, and which is usually inaccessible to protesters due to police surveillance. Films will need to take advantage of passing the camera between group members, navigating unusual landmarks given the constraints present, and getting to the goal at a specific location in the civic square on time. The action is a model of empowering protester filmmakers who are in position to subvert government interference while participating in social action.