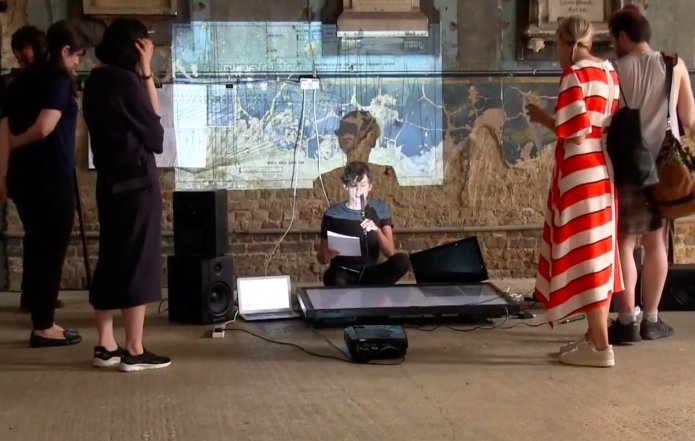 6 Weeks in Kyiv (2018) is a performance about inequalities: of agency, labour, and vulnerability, and the artists (and by extension all of our) subjectification in relationship to these.

Walker kept a hand-written record of Uber journeys which were only affordable because of the relative economic contexts of where the artist live and earn, and where Walker chanced to be. Partly in badly copied Cyrillic script, the table records the fluctuations of attributed scores affixed to us. Data, via breath, voice and vocoder, is lifted from its initial intent to become something other.

As individuals, we are all increasingly formed as subjects through being rendered into various forms of text. Sometimes we are aware of this (passports, birth certificates, CVs) and other times less so (the ‘harvesting’ of our digital data and other furtive forms of surveillance). We have to be complicit in this rendering into text to be compatible with the world: to work, to vote, to cross borders.

About the Artist
Adam J B Walker’s artworks are fragmented constellations of engagement with the public sphere, sometimes coalescing into contingent counter-narratives to the presumed way of being. Working principally with text as both form and concept in its broadest sense, he seeks to critique, subvert and undermine dominant conceptions of the body-subject-affect relationship.